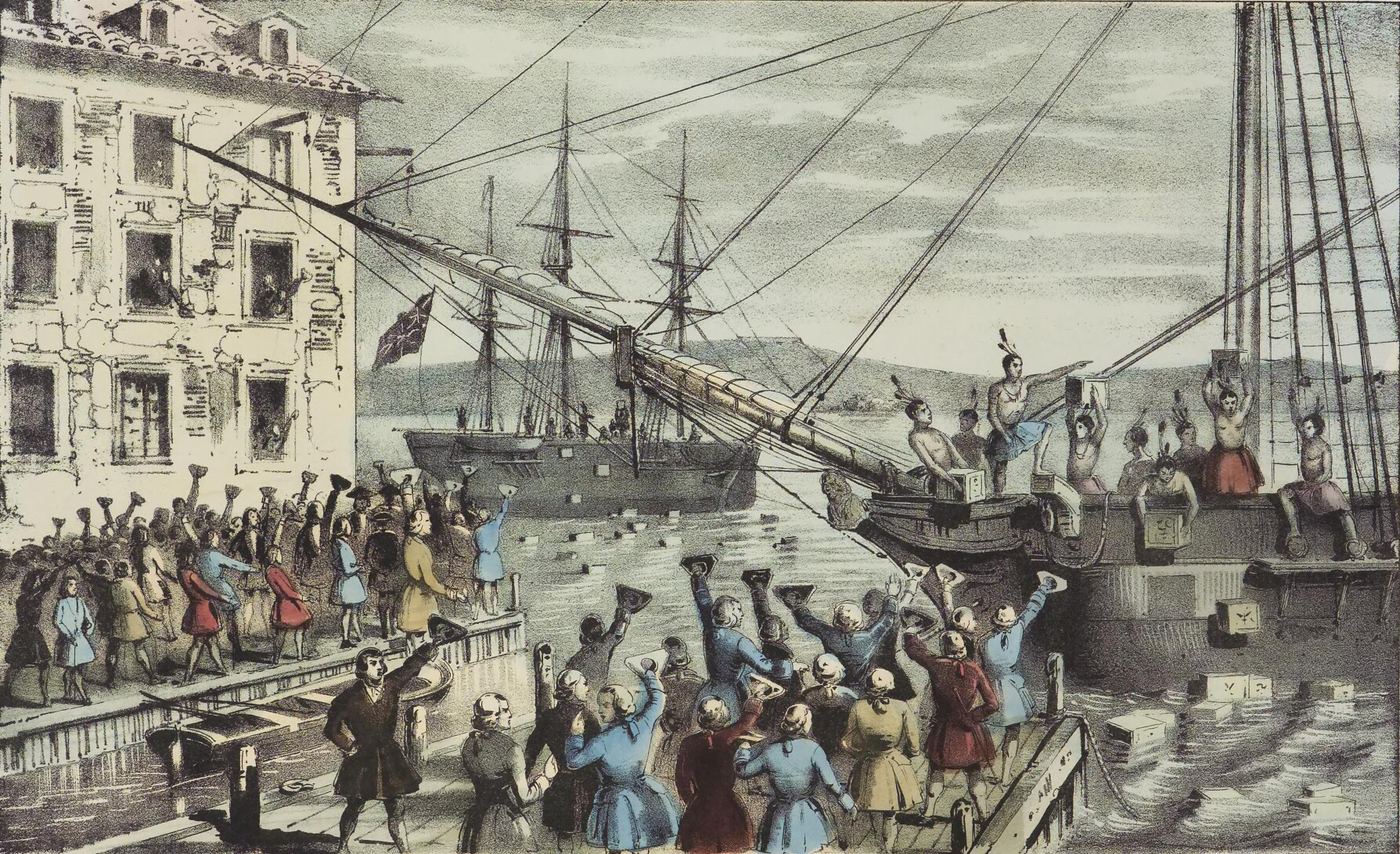 My birthday was the spark for me to study History. I've studied Revolutions, Rebellions and the Governments they leave behind (that's why my last post is a warning to the Democrats -- The Roman Empire began with thoughts like yours).
When is my birthday? December 16, 1970. (Oh, if you want to get me a present, visit my Wishlist, hint, hint)
What happened on December 16?
In 1998, President Clinton, bombs Saddam Hussain in Iraq because of the threat of Weapons of Mass Destruction;
In 1991, the United Nations revokes the "Zionism is Racism," bill.

but the most important thing that happened on my Birthday occured in...

Like Camus' Rebels, it was the concept of standing up to the State (at the time, the King of England. George III), and saying, "NO!" The taxes were too high, business started to fail, and trading could not be done in Colonial Boston.

By throwing the Tea overboard, the colonists were striking a blow for less taxation among their brethren. Here is what participant, George Hewes wrote of the Boston Tea Party:

The tea destroyed was contained in three ships, lying near
each other at what was called at that time Griffin's wharf, and were surrounded
by armed ships of war, the commanders of which had publicly declared that if the
rebels, as they were pleased to style the Bostonians, should not withdraw their
opposition to the landing of the tea before a certain day, the 17th day of
December, 1773, they should on that day force it on shore, under the cover of
their cannon's mouth.

On the day preceding the seventeenth, there was a meeting of
the citizens of the county of Suffolk, convened at one of the churches in
Boston, for the purpose of consulting on what measures might be considered
expedient to prevent the landing of the tea, or secure the people from the
collection of the duty. At that meeting a committee was appointed to wait on
Governor Hutchinson, and request him to inform them whether he would take any
measures to satisfy the people on the object of the meeting.

"To the first application of this committee, the Governor
told them he would give them a definite answer by five o'clock in the afternoon.
At the hour appointed, the committee again repaired to the Governor's house, and
on inquiry found he had gone to his country seat at Milton, a distance of about
six miles. When the committee returned and informed the meeting of the absence
of the Governor, there was a confused murmur among the members, and the meeting
was immediately dissolved, many of them crying out, "Let every man do his duty,
and be true to his country"; and there was a general huzza for Griffin's wharf.

"It was now evening, and I immediately dressed myself in the
costume of an Indian, equipped with a small hatchet, which I and my associates
denominated the tomahawk, with which, and a club, after having painted my face
and hands with coal dust in the shop of a blacksmith, I repaired to Griffin's
wharf, where the ships lay that contained the tea. When I first appeared in the
street after being thus disguised, I fell in with many who were dressed,
equipped and painted as I was, and who fell in with me and marched in order to
the place of our destination.

When we arrived at the wharf, there were three
of our number who assumed an authority to direct our operations, to which we
readily submitted. They divided us into three parties, for the purpose of
boarding the three ships which contained the tea at the same time. The name of
him who commanded the division to which I was assigned was Leonard Pitt. The
names of the other commanders I never knew.

"We were immediately ordered by the respective commanders to
board all the ships at the same time, which we promptly obeyed. The commander of
the division to which I belonged, as soon as we were on board the ship appointed
me boatswain, and ordered me to go to the captain and demand of him the keys to
the hatches and a dozen candles. I made the demand accordingly, and the captain
promptly replied, and delivered the articles; but requested me at the same time
to do no damage to the ship or rigging.

"We then were ordered by our commander to open the hatches
and take out all the chests of tea and throw them overboard, and we immediately
proceeded to execute his orders, first cutting and splitting the chests with our
tomahawks, so as thoroughly to expose them to the effects of the water.

"In about three hours from the time we went on board, we had
thus broken and thrown overboard every tea chest to be found in the ship, while
those in the other ships were disposing of the tea in the same way, at the same
time. We were surrounded bv British armed ships, but no attempt was made to
resist us.

"We then quietly retired to our several places of residence,
without having any conversation with each other, or taking any measures to
discover who were our associates; nor do I recollect of our having had the
knowledge of the name of a single individual concerned in that affair, except
that of Leonard Pitt, the commander of my division, whom I have mentioned. There
appeared to be an understanding that each individual should volunteer his
services, keep his own secret, and risk the consequence for himself. No disorder
took place during that transaction, and it was observed at that time that the
stillest night ensued that Boston had enjoyed for many months.

"During the time we were throwing the tea overboard, there
were several attempts made by some of the citizens of Boston and its vicinity to
carry off small quantities of it for their family use. To effect that object,
they would watch their opportunity to snatch up a handful from the deck, where
it became plentifully scattered, and put it into their pockets.

"One Captain O'Connor, whom I well knew, came on board for
that purpose, and when he supposed he was not noticed, filled his pockets, and
also the lining of his coat. But I had detected him and gave information to the
captain of what he was doing. We were ordered to take him into custody, and just
as he was stepping from the vessel, I seized him by the skirt of his coat, and
in attempting to pull him back, I tore it off; but, springing forward, by a
rapid effort he made his escape. He had, however, to run a gauntlet through the
crowd upon the wharf nine each one, as he passed, giving him a kick or a stroke.

"Another attempt was made to save a little tea from the
ruins of the cargo by a tall, aged man who wore a large cocked hat and white
wig, which was fashionable at that time. He had sleightly slipped a little into
his pocket, but being detected, they seized him and, taking his hat and wig from
his head, threw them, together with the tea, of which they had emptied his
pockets, into the water. In consideration of his advanced age, he was permitted
to escape, with now and then a slight kick.

"The next morning, after we had cleared the ships of the
tea, it was discovered that very considerable quantities of it were floating
upon the surface of the water; and to prevent the possibility of any of its
being saved for use, a number of small boats were manned by sailors and
citizens, who rowed them into those parts of the harbor wherever the tea was
visible, and by beating it with oars and paddles so thoroughly drenched it as to
render its entire destruction inevitable."

And now today, April 15, 2009, Tax Day across America is filled with Tea Parties. It is filled with Republicans, Independents and Democrats who are standing up to the State and saying, "NO!" After 8 years of hearing "Dissent is Patriotic," The Inner Party of the Democrats (Think INGSOC) are complaining and mocking dissent.

Where will I be tonight? I will be at the Van Nuys Tea party taking part in my first protest since 1990 - 1991 (As a Democrat, I protested against President George H.W. Bush for not using the military to bring Democracy to the Middle East, my how times change). I will be carrying a sign that says:

No Taxation without Representation

And it will have the picture above. Hope to see you in Van Nuys!