I spent the last few weeks preparing (mentally) for my Sister's and Brother in Law's wedding.

Two wonderful people.  In Honor of the new couple, they get a tag here in the Valley:


Texas was a nice place with wonderful people and I saw the Alamo!

And I became an honorary Texan (Yay Lone Star Beer!)!

Now that I have returned,  time to Blog about life here in the Southland! 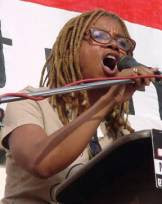 2. Stop the war of genocide against Black America! A young black male was killed by an officer of the US law enforcement agencies every 36 hours alone in 2012, according to a study by the Malcolm X Grassroots Movement. This is Fascism “Amerikkkan” style. Killer cops must go! Stop police killings, brutality and harassment.

3. Fight back against the gentrification against African American working class communities by “globalized” universities, hospitals, and corporate contracting interests (developers).

4. Fight back against right wing (Tea Party) takeover of state governments in eliminating the right to vote particularly for African Americans and the elderly, and attacks against public sector workers and labor. Support “Moral Monday” in North Carolina, Georgia and other places.

6. End all student debt now! (Past, present, and future.) Make education from K to post PhD free – if Cuba can do it, so can the U.S. Fight for academic freedom – 1500 colleges and universities in the US.

7. Demand freedom for all US political prisoners! End the mass incarceration of African people.

9. Down with Zionism! Boycott Israel – the New Nazis of the 21st Century. Cut off funding to Israel.

And here is the Valley's response:

From the shadows of North Hollywood and the mind of a KPFK radio host, comes hate speech (again). For a person like Alan Minsky who wants to build coalitions, his morning crew seems set to destroy any chance of them.  For my candidates from San Pedro to Santa Clarita, every Democratic and Liberal candidate should learn about this "unity"

One thing I learned about "Unity," you give to get. AND don't sound like a Hater.  Look at all these requests.  Not one shows understanding of the other side. Not one amount of (as the song for her program ) "One Love,"

Let's break a few of these down:


First, the most personal: Number 9.

How dare you Ms. Prescod?  Have you no shame?

Know who else shares your view about Jews? ISIS.

Allow me to quote:

ISIS has “not only stated intentions to form a caliphate, but named U.S. and Jewish people as targets specifically,” said John Cohen, who until earlier this year was an undersecretary for intelligence and analysis at the Department of Homeland Security. “There’s a significant threat to Jewish communities.”

When you compare Jews and Israel protecting themselves in the ONLY Jewish State in the world to Nazi's, you share the same political bedsheets as ISIS.   Every Jew killed within the sound of your radio show is on your hands.  The blood is yours.

You did not care if Yaakov Naftali, 16, Gilad Shaer, also 16, and Eyal Yifrah, 19 died.  They were taken from their homes and killed.  You claim to care for the youth, except for Jewish ones. Except for Israeli ones.  Hamas cheered every Israeli death, so do you.

And let me refresh your history.  Remember "Land for Peace?"  Israel gave the Palestinian the land to build and grow their own country. The Gaza Strip has beaches and already built homes.  What did they do with it?

Send missiles into Israel with it. If the Gazans want a country, all they need is to build roads, schools and have elections.  And stop attacking their neighbors.  You wouldn't like it if someone threw bombs in your backyard everyday, especially if you gave them the nice house next door.


Tea Parties and the Right Wing: We're here, get used to it!

But in your show,

A) You never interview a Republican or Conservative or Local Tea Party Member;

B) Every time you bring up the Republicans, Conservatives or Tea party, you get it all wrong.  Even WBAI interviewed Ayn Rand.  Are you so scared of other ideas that you refuse to call up and discuss if a rumor is true?

Apparently your Hate wants the Tea Party (Fiscal Conservatives), Republicans (usually Establishment from DC fighting against the local groups) and Conservatives (You don't even know the branches Ms. Prescod) to stop being part of the American Polity.  That means if anyone of the Right goes to your website or FB page or Twitter, your issues are moot.

If you can't play nice with others (and that goes for my side too), don't expect any give.  If you live in America, you're going to have to meet us and speak to us.

Go back to Haiti if you Hate Jews and Republicans.

No Unity on Racial Issues either

Now, some good issues are addressed among them: incarceration rates among African American boys and men.  Yes, I would rather that not happen. Before the 1968 social explosion, even if you protested you wore a shirt and a tie.

But Prescod also opposes business' entering poor areas.  OK Ms. Prescod (and Mr. Minsky), hire up the impoverished (such as those on Skid Row) at KPFK.  You don't want others doing it?  Government (local, state and national) is not filled with funds

If you Hate business', don't expect anyone to give funds for the fund drive. There is cultural rot all over, how do you stop the Gangs, the lack of Fathers, and the idea that the current Leadership of Democrats that do not care about these neighborhoods to make change?

Ms. Prescod, you don't want things to get better, you want to complain.

I'm not even going into your support of Dictators everywhere and dancing on graves of people of the Right.  But this is America, we like fair play and Democracy.

Ms. Prescod, Mr. Minsky, what are either of you doing for "Unity" in America? NOTHING.

The hate speech on Pacifica is getting known.  Try being nice next time.

My question: Ms. Prescod is an immigrant from Haiti, yet she never reaches out to those who thinks differently.  Why?

The 12 Monkeys in Foreign Policy: Our President is Jeffery Goines and Our Spies are James Cole

When I geeked out to Star Wars back in the 70's, I found Star Trek (The Original Series), and then Doctor Who.  What sci-fi offers is a (hypothetical for now) trip to the Stars, to dystopias, and to other times.

Twelve Monkeys (1995) has been hailed as a film that gets concept of Time Travel (and Predestination Paradoxes) correct.  The movie touches on madness, reality and fate vs. free will.  And yet, even though the plague in the movie was fake, the current fires in foreign policy are just as bad. Both threaten to engulf humanity, what happens next?

Currently, the President, a Harvard Graduate (and legacy like President Bush before him), wanted to go to war against Assad and now ISIS.  It contradicts itself.  As shown in the full 60 Minutes interview:

Throughout the Bush Administration, the Democrats wanted out of Iraq (and Afghanistan too).  They saw the Republican President going to war as end, not a means to an end.  When the failed haberdasher, President Truman helped end the war, he left troops behind to help transition Europe and Japan into functioning Capitalistic Democracies.  And because the non-Ivy League, non-college educated Truman did that, the USSR was caught in check until it fell.

When President Obama campaigned on bringing the troops home (and the Democrats all fell in lockstep with the "Rush to War" bombings of Syria and Libya), there was no "endgame," planned for the region.

And how do the Army of the 12 Monkeys fit in?

James Cole (Bruce Willis) is sent back in time to find a pure sample of the virus that kept humans off the surface.  He gets sent back to 1990 (6 years before it starts) and ends up in a sanitarium in Balltimore.  There, he meets Jeffery Goines (Brad Pitt), whose father creates diseases and Dr. Railly (Madeline Stowe), who treats him.

He bounces through time and place eventually ending up in Philadelphia 1996.  A mysterious message was heard in the future, the most haunting scene is where Dr. Railly calls off-screen.  The quote:

President Bush's strategy was to bottle up Iran and bring more Democracy, thus more peace, into the Middle East (When Thomas Friedman wasn't a hack, he wrote how Democracies don't make war on each other.  A theory I have always subscribed to, see Truman)  The Democrats heard the wrong message, Senator Obama was playing animal activist while the threat of the plague hung over the story.

Now throughout the Obama Administration, the President has ignored the intel briefings on the World.  Thus, any foreign policy that President Obama acted on, he had no sense of causality.  There was a plan to take out troops from Iraq, but there was no Mission Objectives in Afghanistan since 2009.  Thus, without a sense of causality or intel, the World started to burn this past summer.

Since the Church Commission, Democrats have made it very clear they don't trust Our Men and Women in the Dark. I do.

President Obama thought he was smarter then the people extracting the information and only reacted when the news became bad on television. Cole in 12 Monkeys was the scientists spy into the past.

Cole was a pawn by everyone save Railly.  They were the only ones talking Cassandra like about the danger of Jeffery Goines and the Army of the 12 Monkeys.  No one listened.  Jeffery Goines thought (due to his wealth and madness) he was better then everyone else in the movie; Whether in the Sanitarium or at the party.

Because there are no Senator Baker's and Goldwater's in the current Democratic Party, there is no one to tell the President to read the Daily Briefing. There are no Goldwater, Rhodes and Scott in the current members of the Left.  Not since 1994.

What is my solution?

Before the Presidential primary of either side, I would hope the members of the US Intelligence vet the candidate's foreign policy because the media did not (well, with the GOP they will).  If you are a member of that Industry, pleads note that since the Church commission, the Democrats use the members (like Cole was used by the scientists) and throw you away.


There is fire and embers from the Middle East, why is the President re-acting rather then taking the lead?

My question: Can we now point and laugh at the Anti-Bush protests and Democrats and say their foreign policy endangers us all? (especially our men and women in the US Intelligence)