Let me quote some Doctor Who because it fits:

The Doctor: How long would you say we were unconscious for, please?
Cleaves: Not long, a minute, two minutes.
The Doctor: I'd hazard we've been out a teensy bit longer.
Cleaves: For how long?
The Doctor: An hour. I've seen whole worlds turn inside-out in an hour. A lot can go wrong in an hour.
-- Doctor Who "The Rebel Flesh," season 6

For want of a nail, Ambassador J. Christopher Stevens would still be alive and American Embassies would not be on fire. 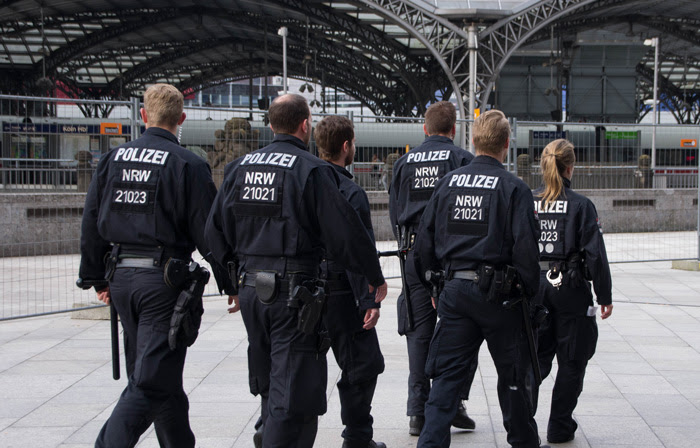 Like any tragedy, it occurred in Three Acts and the chorus of American media focus on the wrong subject.


Act I: The White House

Let me quote Marc Thiessen of the Washington Post:

President Obama is touting his foreign policy experience on the campaign trail, but startling new statistics suggest that national security has not necessarily been the personal priority the president makes it out to be. It turns out that more than half the time, the commander in chief does not attend his daily intelligence meeting.

The Government Accountability Institute, a new conservative investigative research organization, examined President Obama’s schedule from the day he took office until mid-June 2012, to see how often he attended his Presidential Daily Brief (PDB) — the meeting at which he is briefed on the most critical intelligence threats to the country. During his first 1,225 days in office, Obama attended his PDB just 536 times — or 43.8 percent of the time. During 2011 and the first half of 2012, his attendance became even less frequent — falling to just over 38 percent. By contrast, Obama’s predecessor, George W. Bush almost never missed his daily intelligence meeting.

As Congress' job is to pass Budgets, a Presidents job is to be ready for the unexpected.  Sun Tzu would not be happy with Act I Obama.

Thus, what enables the wise sovereign and the good general to strike and conquer, and achieve things beyond the reach of ordinary men, is FOREKNOWLEDGE. Now this foreknowledge cannot be elicited from spirits; it cannot be obtained inductively from experience, nor by any deductive calculation.

Knowledge of the enemy's dispositions can only be obtained from other men.
-- Sun Tzu, Chapter 13

During this time, President Obama and the PM of Israel could not agree to even meet.  An American President could not even find the time to meet an American ally.  Sign and signals from 1600 Pennsylvania Avenue going through the world.

Even though, during the Democratic national Convention, President Obama's foreign policy expertise was promoted, no one of the Left, the Obama campaign (or in the White House) predicted what came next.

Act II: The Date and the Attacks

This act does not begin on August 24 or December 7 or April 12 but September 11th.

Only 11 years away from September 11th, and President Obama stopped reading his intelligence briefings.

Not reading the PDB's by President Obama is not Romney's fault.

The riots in Egypt and Libya were pre-planned (if someone had read their PDB's...) and our walls were breached and people died.

As this is an Election year, Romney stood and pointed out that "The Emperor [Obama] has no clothes," The Media attacked Romney for his speech and not President Obama for not doing his job.

Find Governor Romney on this Org Chart of the US State Department:

Or this Org chart: 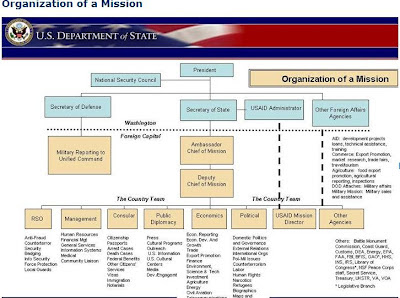 And what was the US Egyptian embassies tweet during the attack? 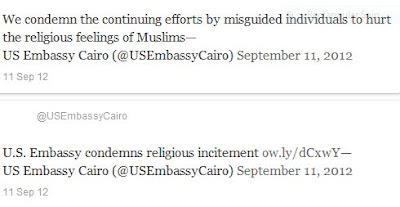 Someone in the White House forgot the lessons of Tehran 1979.


Act III:  The First Amendment matters (except when it doesn't)

Rather then focus on the planning, the White House and their Media Praetorians decided to focus on an obscure, posted to YouTube (not released in the theatre) filmmaker in California.

I will be doing a post on the First Amendment later, but fact is, he was taken in a "Midnight Raid,"

Can you imagine if President Bush did that Michael Moore?!? Wait, he didn't do it to Moore -- so why are the Left all happy about a midnight raid?

Glenn Reynolds put it simply -- this was wrong and President Obama, if he had any honor, should step down.

While the Media Praetorians attack Romney, the attacks on the Embassies continue.  There should be a denouncement at the debates, we'll see.


My question: Why didn't President Obama protect the Embassies on 9/11?

** Back in 1995, I did a Senior Report at American University detailing how Ambassadors are appointed, even when two branches are fighting with each other (I used Watergate, not knowing the branches were ready to fight again).  I met a few former Ambassadors and Charge d'affairs -- a few of whom were captured in Tehran 1979.  At every Embassy, there are intelligence agents working to keep America safe (and their info goes into the PDB's).