Where's Henry Waxman? Not in Los Angeles, But Living Large in Bethesda, MD!

If we lived in a Parliamentary system (as the UK does), it would not matter where a Congressional candidate makes his or her home.  But as Americans, we believe in the  Cincinnatus concept of Public office:

Omnia reliquit servare rempublicam
("He relinquished everything to save the Republic")

This was promoted by General (then President) George Washington.

Who was Cincinnatus and what does this have to do Henry Waxman of Maryland?

Have you ever heard the story of the farmer plucked by Roman Republic to be a Dictator? That same dictator, after he saved his people returned to his farm?  That was Cincinnatus.

Now, what does this have to do with Henry Waxman of Maryland?

Let's read California Election Law (which I had to follow in my run for Central Committee):


In other words, you cannot run for any partisan (or non-partisan) office in California without actually living in California.

Every candidate has to file from their home, let's see where Bill Bloomfield filed from:

Now let's look at Henry Waxman, running in the 33rd District of California:


And where does Henry Waxman live?

He has lived in a place where they had to re-value his home.....Should I look back further into the FEC records?  I don't think Waxman pays California Taxes either. 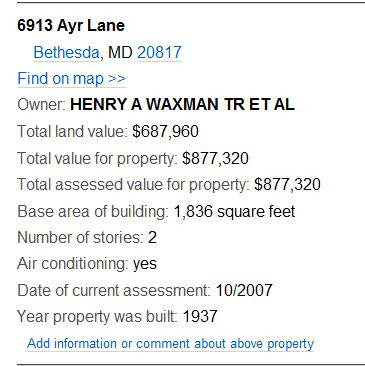 And trust me, I tried looking for Waxman on the Westside and before the 405. Each city, from Santa Monica to Hollywood -- Henry Waxman does not live in Los Angeles!

Thus he has no right to run for office in the 33rd!
Vote for the ONLY Legal Los Angeles Candidate in the CA-33:
Bill Bloomfield!

He is a modern Cincinnatus for Los Angeles.

My question: Will someone on Capitol Hill file Ethics Charges on Henry Waxman living out of the district by 3,000 miles?