Taylor Marsh and Charles Pierce: Praetorians for the New Nixon but Still Hating the Old Nixon


When we on the Right talk of Media Praetorians of Democrats and President Obama, one need only look at Taylor Marsh and Charles Pierce.

For all the talk about Fox and "talk radio," these organizations go in the opposite directions and speak "Truth to Power." when the POTUS is a Democrat.

Old Nixon and the Press

Taylor Marsh's only job is to protect Democrats and Former Secretary of State Clinton; Charles Pierce's platform, Esquire, is not to investigate whomever is in office, but to show love and affection for every Democrat. 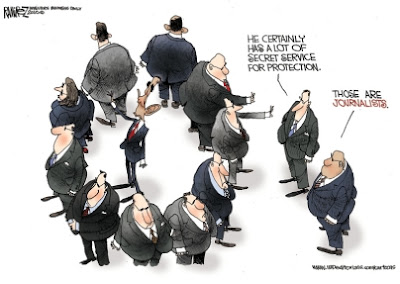 Let's rewind to the Old Nixon and see what he was in trouble for:

Having partisans record their opponents;

and Article 2, section 1 of Nixon's Impeachment:

Nixon’s statement about executive illegality above has turned out to be the bedrock of the modern presidency, unless of course sex is involved.

First Lady Hillary Rodham Clinton fought for her husband’s presidency and her actions were seminal in saving it, which I cover in the history of Hillary’s rise in my book The Hillary Effect, as Democrats in Congress grew antsy over the deplorable conduct of their party leader and president. But whatever people thought of President Bill Clinton’s scandalously stupid actions with the intern Monica Lewinsky, Mrs. Clinton knew they didn’t come close to meeting the bar of impeachment that even Nixon escaped, and the public agreed. Clinton should have been censured for his actions, while impeachment, especially looking at the Nixon or Reagan litmus tests, was absurd.
Richard M. Nixon ducked impeachment by being the only president in U.S. history to resign.

[Title of Post: Richard Nixon Deserved to be Impeached]

If he were still alive, and the existence of god thereby utterly disproved in a huge and public way, this would have been Richard Nixon's 100th birthday. It is the 40th anniversary of the first turning of the year since burglars in his employ broke into the offices of the Democratic National Committee, requiring him to engage all the power and majesty of the presidency to cover up their crimes. Yesterday was the 40th anniversary of the guilty pleas of two of those burglars, Gordon Liddy and James McCord. If there had been any justice served in 1974, this would be the 29th anniversary of Nixon's having finished his 10-year bid in the federal slam for obstruction of justice and conspiracy to obstruct justice.

(And, not for nothing, but last December 18th was the 40th anniversary of the "Christmas bombing" of Hanoi and Haiphong, in which United States warplanes dropped 20,000 tons of bombs and killed almost 2,000 Vietnamese people. And this is what was said about that by Henry Kissinger, who I think is possibly even less excusable a human being than Nixon: "We bombed the North Vietnamese into accepting our concessions." The world went mad back then and, when it did, Nixon was there, waiting in the shadows to take advantage of it.)

Both posts written about the Late President Nixon were written January 9th of this year.  The Hate of the Left outlasts their "enemies,"

Here is what Marsh said in her comments over Benghazi:

What you & Republicans are missing is that the Benghazi talking points AFTER THE EVENT itself, while stupid & should have stated clearly it was a terrorist attack, didn’t lead to or cause the death of anyone.

People have a right to be upset about the political spin, but it didn’t cause one death.
Republicans are whipping people up overrewrites that matter,but won’t solve a thing.

They are hoping to derail Obama & drag down his 2nd term, while also wrestling their foreign policy failures during Bush back from Dems.

I’m just not going to help them do it, because including terrorist attack in talking points, which should have been done, would not have saved one life.

That is what Clinton meant when she said “What difference does it make?”

Thus, the bolded, large words means, if the "Truth," of Benghazi leads Marsh to make alliances with Rove and Republicans, she would not do it. These are words of Praetorians, not Truth seekers.

The New Nixon and the Modern Praetorians

If the Media and Liberals were serious about holding President Obama's feet to the flames over foreign policy, where were the protests during 2012? Where was the Primary opposition? For all the talk about Gitmo, the drones and everything else between 2001 - 2008, most of the partisans of the press lied to the public.

Taylor Marsh and Charles Pierce are happy being puppets for this Administration and other Democrats.

THERE ARE denials all around in the Mitch McConnell tape scandal, but thefinger pointing is all going one place. People associated with or formerlyassociated with Progress Kentucky are in the crosshairs, with one officialresigning, while the F.B.I. continues their investigation.

Buzzfeed got to some of the players, as well as those impacted. It seemsthat the beneficiary of the fallout is Senator Mitch McConnell at this point.

If the leakers of the tape wanted it to hurt McConnell, their planbackfired. McConnell raised money off his claim that he had been the victim of“Nixonian” tactics, and generally fomented conservative support with hisoutrage-based spin strategy after the tape came to light. Now that it lookslike McConnell might be proven right about the origins of the tape, it’s likelyhe’ll get even more mileage out of Progress Kentucky. – The Disastrous CollapseOf Kentucky’s Least Effective Liberal Group

But this event making him into a sympathetic character?

Kentucky Democrats aren’t ready to say Progress Kentucky has helped McConnell, but national Democratic observers have their jaws on the floor as they watch the group turn McConnell into a sympathetic figure, generating good headlines for him time and again.

Sorry, but that characterization I just do not buy.

Hold on a second there, terrapin head. I consider myself one of the curators of that most precious of all political pejoratives — "Nixonian." Taping is not "Nixonian" unless it is part of a campaign led by White House aides at the order of the president, and unless it involves using parts of the federal intelligence apparatus to confound the investigative agencies of the federal law enforcement apparatus, and unless the person who seeks to benefit from it is the president of the United States. What it sounds like happened here is that you invited someone to a staff meeting who taped your people as they discussed the pre-emptive ratfking, and you got ratfked in return.  Nixon would laugh at your outrage.

Thus, taping of a candidate (especially an opposition to the Party of the White House) is not Nixonion.  See these two members of the Press said so!

If you believe Marsh and Pierce, there is a used bridge I'd like to sell you.


President Nixon used the IRS to oppose groups who opposed him outside the White House, how will Pierce and taylor thread the needle?


In case you were wondering, now that we're re-enacting Whitewater, whether or not we can be seeing a reprise of Filegate and Travelgate, and several of the other minor Clinton-era obsessions, wonder no more.

So, if you involved with a Tea Party group throughout 2009 - 12 and got questions like these (Read them here, then come back to the Valley)

There are questions about familes, contacts and other non-related things with the whole purpose to silence the opposition by the Right.

Here's a hint: If you are defending actions you decried over 20 years ago,
A) You are a hack;
B) You have no principles and
C) Instant Karma will get you when the Parties switch positions.

MY question: Why do Taylor Marsh and Charles Pierce support things done by a Democrat that they opposed done by a Republican?

***And I say, if Nixon was impeached for it, it is still wrong today.  Consistency -- learn it!